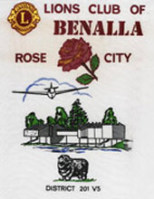 The Lions Club of Benalla was formed in late 1957 and received its Charter in March 1958. Also known as the City of Roses, due to the spring blooming of over 2000 rose species planted around the city.

Benalla is situated approximately 195 Kms (122Miles) north east of Victoria's capital city, Melbourne, and boasts many sites of interest within close proximity, among which are the State Gliding Centre, numerous wineries, lakes, the Weary Dunlop memorial and much more.

Some of our activities have been ongoing for over 30 years, like the provision of Street Seating begun in April 1958, Carols by Candlelight December 1962, Lion Mints 1960, the Street Caravan 1969 and Assisting in the upkeep of the 15 Mile Creek School Camp.

Along with the Lions Ladies Committee, the Benalla Lions Club disburses an average of $12,000 to local, national and international charities each year.

A current project that has been running since 2008 is the Car Boot Sale. Running every Lakeside Market. Contact Peter 0448 399 227

Other services Offered by Lions Club of Benalla Incorporated